The Practice is an online magazine published by Harvard Law School’s Center on the Legal Profession. It’s a valuable resource for legal professionals, full of news, analysis, and continued learning on the global practice of law.

Published first in 2014, and running seven issues per volume in the succeeding years, The Practice has a solid foundation of rich content, but it just wasn’t reaching enough of their target audience. Content wasn’t showing up in relevant web searches and it couldn’t be shared on social media.

Without a demonstration of The Practice’s value, it was harder to motivate people to buy a subscription.

The Obstacle: A Wall Too Thick 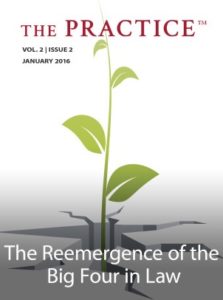 The problem began with a common question asked by all publishers – web and print alike. How do we convince people to pay us for our content rather than just perusing it online or browsing through it in a bookstore?

Like many online publishers, The Practice was using a hard paywall: a barrier that prevented idle readers from accessing the goods without paying a fair price.

But a hard paywall like theirs caused its own problems: it kept sticky-fingered readers out, but it also blocked access to the bots that control the search engines and prevented the readers they did have from sharing their finds on social media.

The first issue was free and accessible to all while the rest of their content was hidden behind the paywall. It wasn’t the right kind of web exposure to create a solid reader base online.

The Practice was already publishing on WordPress and was happy with it as their home. It was easy to use, strong enough to support their enterprise, and endlessly adaptable to their needs.

And because of those qualities, it was also the platform chosen by ZEEN101 to develop their suite of digital publishing software…including Leaky Paywall.

The Solution: A Leaky Paywall For A Middle Ground

The Practice wanted a solution that allowed the search engines and social media outlets to see their rich content without giving it all away for free.

They also wanted to be able to manage two different audiences: individuals and firms.

But they wanted something more, too.

They wanted to engage in some serious email list-building.

List-building is a fantastic tool for online publishers – it allows you to target a very specific and obviously interested audience. Advertising to a list is a proven method to increasing subscriptions, and thereby revenue.

ZEEN101’s Leaky Paywall was exactly what The Practice needed.

Leaky Paywall always has the capacity to allow search engines and social media outlets to view and share the content behind its borders.

But it also allowed them to set their meter a little differently.

After two free articles, The Practice readers are offered the traditional option of purchasing a subscription. But they are also given the option to register – to supply their email address – for two more free articles.

In a word: list-building.

Leaky Paywall’s method of handling the corporate subscriptions also adds to The Practice’s list. When a firm purchases a subscription, their domain name is added to the paywall. Anyone with a valid domain email can use that email to log in.

The Practice’s Managing Editor, Bryon Fong, is more than a little pleased. “We have significantly more new subscriptions coming in, individual and corporate,” he says. “Moreover, because our articles are all accessible, the ideas and research contained in The Practice are reaching an ever-growing audience.”

In the six months since The Practice began using Leaky Paywall:

[bctt tweet=”Compared to the six months prior, subscriptions are up more than 300%.” via=”no”]

This is, in no small part, to The Practice’s sky-rocketing social media presence.

While few people would think of lawyers as social media rockstars, Twitter, in particular, has become a hub of activity for the Center on Legal Profession. Formerly used to promote events at the academic research center, the inclusion of The Practice articles has been game-changing.

Tim Shea, research associate at The Practice, says, “It was like flipping a switch. Users could now sample The Practice; having that has been huge, for social media in particular.”

Their new layout allows them to revive lost content from their lower trafficked days. A simple checkbox in the back-end allows them to feature past issues on the homepage, alongside their most recent articles.

“The new site has been fantastic,” says Fong.

Looking to bring your publication up to speed? Why not get in touch to see what’s possible?

Get our free guide for publishers:

Ready to grow your subscriptions?